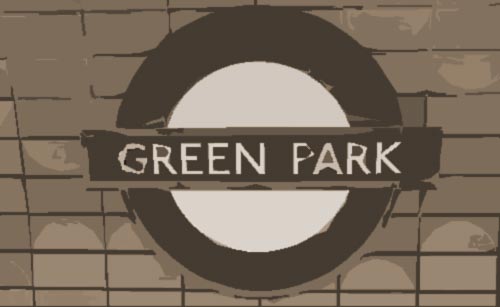 I had time enough because I learned from previous experiences : don’t overestimate the speed of the tube.

So I arrived on time at Green Park station. had my London Map with me (don’t go anywhere without it) and followed the directions on the map. It took me about 10 minutes to find Queen St. Now all I needed to do was to find number 29. Queens St. wasn’t really long, actually, the street ended before I had a chance to find number 29.

I walked back and checked again, but no, number 29 just wasn’t there. I walked around the corner, but that wasn’t Queen St anymore. But there was a very expensive hotel in that street. So I asked one of the guys. This guy, he was dressed in uniform with high hat (I swear he looked like Col. Osborne) , long coat, and his job was holding up an umbrella over your head, when you leave the taxi and have to walk the 3 meters from the taxi to the hotel entrance. Yes it was that expensive, the hotel. And I was wondering if I had chosen the right profession.

That nicely dressed charming guy with hat was French (talking about delicious accents). I asked him for Queen St number 29. He had no idea either. We both looked in my mapbook for the 3rd time, under his umbrella which he now was holding up for me, as it was drizzling a bit in London. What a gent. But there only was one Queen St. in London, so this had to be the one. I crossed the street one more time, but no luck. It was 2.00 pm, and I was supposed to be having a jobinterview at this very minute. Well done. Again.

I decided to call the company, telling them that I was really silly, as I had probably written down the wrong number to their address. But they said no, 29 is the right one. They should be easy to find, as they were located right opposite the church.

There definetely wasn’t a church in the Queen St. I was standing in.
“You are located in Westminster right, close to Green Park station ?” I asked her.
“No we are in Covent Garden”, the lady said.
“Oh!!” I said, “that could be an explanation ! But how come that Queens St. in Covent Garden isn’t listed in my London map book bible ?”
“We are in Great Queen St., and that really should be listed”
“Ahh, Great Queen St., yes that is in Covent Garden, also in my book.
I am going to be agressively late for my appointment with your director, God how embarrassing, but could you tell him I am on my way to the right address now ?”
She laughed “Don’t worry about it – I’ll tell him !”

And so I went back to Green Park, travelled 3 stations to the east on the Piccadilly Line, hopped off in Covent Garden and found their office without any problems.

About half an hour too late. Because I had overlooked “Great” on their address while writing it down.
Just Great.
Keep on going like that, that will really improve your chances of finding a job.