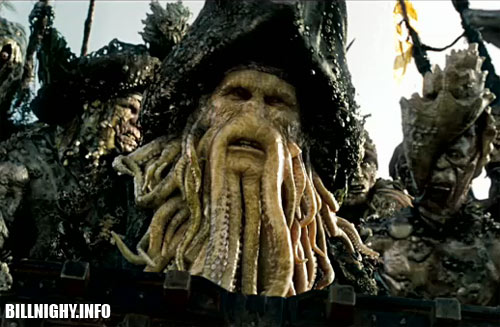 Tagline: Capt. Jack Sparrow owes an unpaid debt to Davy Jones and his army of sea-phantoms…his soul. Now, he must find a way to save himself from becoming one of them, and suffering forever.

The good
Davy Jones. Think about the fact that this character is 100% computeranimated, and still so unmistakenly recognizable as Bill Nighy. That is an accomplishment. Apart from looking like Bill (which is a good start) the tentacles and his clothes are fantastic down to the smallest details. Davy smoking a pipe blowing out the smoke through a hole on his back, and Davy playing organ are hilarious scenes. And Davy having a Scottish accent is a delight.

Johnny Depp is absolutely amazing as Captain Jack Sparrow, and hilariously funny too.

It are those 2 characters that carry the film, the rest is, uhm, filling.

The bad
Orlando Bloom and Keira Knightly. Why exactly do we need them in this film ? I don’t find them particulary good actors, and their characters remain too flat. Apart from that, why the heck did Keira do what she did in the end of the film (and I don’t mean the kissing part) ?

Worse : a bit of a week storyline. There are a lot of great special effects in this film, a lot of sword fighting, and The Kraken (Davy’s pet) is impressive. There are also quite a lot of very comical moments.

But I miss a real story. I think it could have been interesting to learn more about why Davy has become the person he is, and why he cut out his heart. And Captain Jack, as well played as he is, what do we really know about him ? I know it is not a character drama we are watching here, but it is too flat and superficious all together. (But maybe that is my problem. I thought that it maybe had to do with the fact that it is a trilogy – but then a trilogy doesn’t neccesarily have to be bad (think Harry Potter which is much longer than a trilogy)).

I can’t seem to take Mackenzie Crook serious as a pirate (he is the guy playing Gareth in The Office).

Well, it is good entertainment, with quite a few laughs, but I have seen better films, unfortunately. I have some problems giving it a proper rating, Bill and Johnny would lift it to an 8.5, but as a whole it didn’t really match that level. I guess you have to go and see it for yourself.

4 thoughts to “Pirates of the Caribbean: Dead Man’s Chest review”