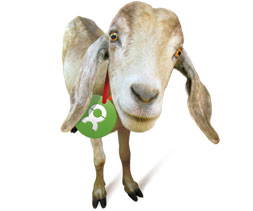 And so I bought a goat.

While the mind is occupied with New York and the like, it doesn’t mean we can’t think about other people a bit. I like to think that that’s what Christmas is all about.

So I bought Eddy. And Eddy is probably going to Uganda, or Zimbabwe, some place where she is needed, and where she hopefully will breed and get a big family.

I like that. Eddy is going to Make Poverty History. For a few people at least.

2 thoughts to “Christmas is all around me”