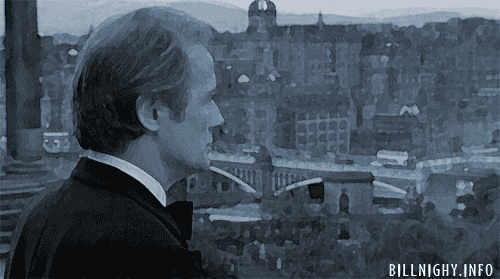 The last day is always a weird day when travelling. It’s often a day you just have to get through before you are off to catch your flight or train. But in stead of waiting (her train goes at 7pm) she still had the photo quest to fulfill.

They had visited most view points in the city, they captured the castle, they conquered the hill and they even stood on the roof of the Scottish National Museum, but none of these were the right place. There was one very last possibility: Calton Hill. The B&B lady called it the shame of Edinburgh because it seemed to be a half castle which had never been finished. They quite liked it. It was another place in Edinburgh from where you have an amazing view over the city. And it looked like Athens. Walking around in this area she found what she was looking for: Calton Hill definitely was the spot. She shot her pictures, compared them and considered the job done.

Right after that it starts to rain, which was fine with the both of them. They jumped on the bus: what better place to spend a couple of rainy hours than in the cinema. They didn’t have to think tooo long about what they wanted to see: Pirates.
Nooooo, no, no, what? Again?
Again!
They must be nuts!
They are!
And they happen to like pirates, in fact one of them is one. And it is about the last chance this year to get some billiciousness in the cinema, so shut it – they went to see Pirates! And you know what – they bloody loved it this third time as well.

As it was a Monday and the middle of the day the cinema was quite empty. They had a very comfortable seat and could rest their legs on the fence in front of them. It was hugely enjoyable. And after leaving the cinema they weren’t too sure that this had been the last time they had seen it. Casino Royale – 6 times, remember?

Now they sit in the park opposite the castle enjoying the sun. A few drops from the sky draw circles on the paper in her notebook. It’s too little to make them leave, and it’s not enough for a rainbow either.

Edinburgh has been good and welcoming. There is enough to see in a weekend and with weather like this – they couldn’t have asked for more. It’s quite likely they will return there. She’s sure Davy will keep nagging until they go again. And that’s good.

Here is the Calton Hill picture they took. Yep that incredibly handsome man was gone. And so were they.