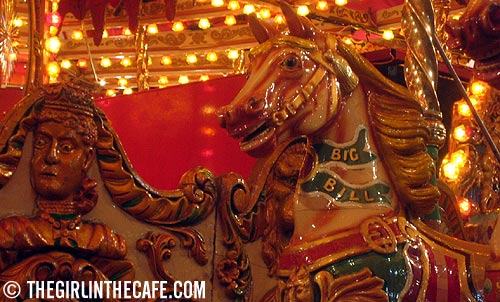 Look who I ran into yesterday, on my way home from a weekend in screen writing class. I felt like my brain had been in the toaster for 2 days, was completely knackered, and needed some fresh air so I decided to walk a part of my journey home. I ended on Leicester Square where the yearly Christmas fun fair was in full flow, I suddenly remembered that I had seen him there last year, and yep, he was there again this year too, Big Bill. We had a little chat about the year that past and my brain felt a lot better when I walked on, on my way home.

About storytelling, there is an important rule in story telling:
Let your characters do things which the audience does not expect. Surprise them.

I have been hugely entertained by all the comments on that one single line in yesterdays post:
I might go and get myself a tattoo.

That sparked passion into a lot of people’s replies, and it confirms the rule. Do something unexpected and people get hooked. I need to apply that a lot to my story.

About that tattoo – despite what everybody thinks – I am seriously considering it and have been for quite a while. If there weren’t any needles involved I would probably already have it.

I don’t care that it isn’t trendy, because I don’t do it to be trendy. And I know it will be there for the rest of my life, that’s fine. And don’t worry – I won’t tattoo “Post no Bills” on my forehead (or on second thought – what a brilliant idea!), nor things like “Davy Jones rocks my boat” or “Slartibartfast rules my universe” (both great t-shirt/post card slogans though, which I am sure will end up on just those at some point). I have thought about this a lot, it is going to be very simply and clean and small, and it will be there to keep me focused, and it will be on a place not visible when wearing clothes. So. Will you still love me when I do it?

This weekend has been interesting. I learned an incredible lot again and I will have to dive into the first rewrite for my script. This is supposed to be the fun part and it’s also the normal way of writing a script.

Sam described it as follows:
First you need a lot of clay (I have the clay now, that’s the draft version of my script)
Then you start to model it.

It all makes sense. You can’t write the perfect script in one go, if you try to, you never get passed page 30. So knowing that Richard Curtis did 34 rewrites on Love Actually, I am about to start my first one and I can’t wait to get started.

“There is no great writing, only great rewriting.” is a famous writers quote.

One last thing about writing. Most people can throw clay on a table (or write a first draft for that matter), but I needed to know if there was any chance that I could actually make something decent out of it. Because, let’s face it, I do have this pretty ridiculous dream about it but who am I to think that I can actually write. So I had Davy gently wrapping a tentacle and a claw around Sam’s neck and asked him (after class) if I should continue this path or if I should choose another. I just don’t want to spend years trying to write while there was no hope that it would ever be any good in the first place. And I wanted someone to give me a very honest straight answer to that question. I keep writing is what came out of it, and I am quite happy with that. And it will be hard work but I don’t mind hard work.

We got a mail from our actor who has seen the short (50 seconds) short we shot in September. He wrote that he had premiered it in his living room with his wife, and 2 friends as an audience, and they all liked it very much. So that was great to hear.

Now I have to catch up on my e-mail and will contact the 12 people who were interested in hearing more about my “let’s stop chasing xmas presents and make a film in December” plan. I have good hope something will come out of it.

December is going rather well until now.