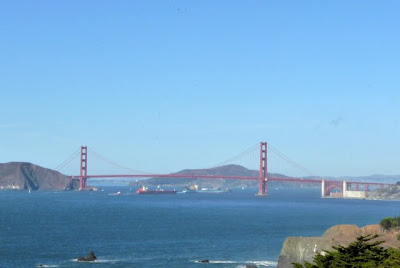 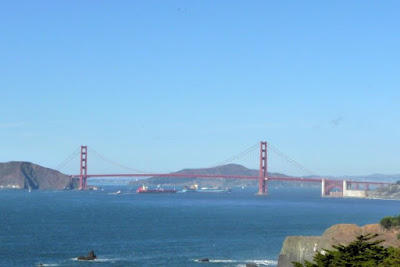 The train trip to San Francisco was a long one (11 hours) but it was worth it. A big part of the trip follows the coast line and the views from the train window were fantastic.
The train arrived in San Francisco exactly on time, and I arrived safely in my hotel.

Here are a few photos from the train and trip:
Los Angeles to San Francisco by train

It was a bit weird to wake up in a new city. I didn’t have a pre defined action plan for San Francisco today, so I started off like a head less chicken. But I decided to buy a transport pass first, so I went down to the waterfront first to do so. From there I could not resist the urge to take a trip one of the wonderful vintage trams that run in San Francisco.

I actually wanted to try one of the well known cable cars too, but the queues for those were so long, that I dropped that for today.

In stead I took a bus to the ocean to see what a San Francisco beach looked like. It looked good. And the weather is perfect here. Still sunny, but just a bit more bearable.

From there I walked a part of the San Francisco Land’s End trail, which gave stunning views of both the ocean and the Golden Gate bridge (now without fog!).

There are a couple of photos here (they are not that great though!):
San Francisco – day 1

There aren’t really any photos of the city itself, but I will take care of that when I am visiting some of the sights at a later time.

If I feel fit enough tomorrow and the weather is good for it I am going to bike the bridge.