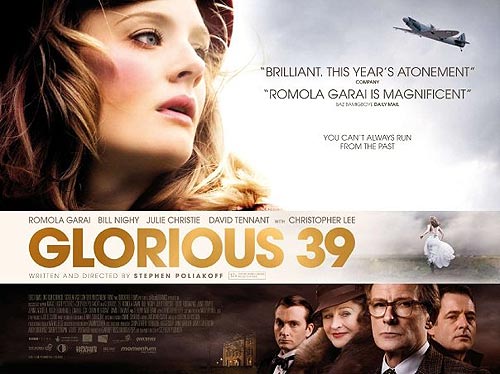 Of course I booked a ticket when I saw that Glorious 39 was going to be screened at the London Film Festival. I love Stephen Poliakoff dramas (Gideon’s Daughter, The Lost Prince are great) and he always seems to be able to assemble a fantastic cast.

In the gorgeous summer of 1939, Anne (Romola Garai) seems to live a gilded life – a budding young actress, she’s the adopted daughter of Tory grandee Alexander (Bill Nighy) and head-over-heels in love with Foreign Office official Lawrence (Charlie Cox). She discovers some innocent-seeming recordings of meetings – but as she begins to understand quite what her discoveries mean, a tangled web of dark secrets begins to unfurl. People who have come into contact with the recordings are threatened and even die. The innocent certainties on which her life has been based dramatically unravel and amidst a growing sense of menace and betrayal, she has to confront the bitter choice she will be forced to make.

I didn’t know this part of British history, and the whole appeasement process that has taken place. It is rather shocking to think what might have happened if things had gone differently in the UK.

The film starts out showing the happy family of Anne but soon turns into a thriller that will glue you to your seat. I felt like someone had punched me in the stomache at the end of the film, only the best films do that. I recommend you to see it (UK premiere around the 20th of November, Europe and US hopefully later) as it is a fantastic (but shocking) film. The cinematography is amazing (it is partly shot in Norfolk) and the acting outstanding.

It was also fantastic to see Bill Nighy take on a role like this (after having seen him fighting guinea pigs (G-Force) and doing the voice of a somewhat short professor with a huge nose (Astroboy) as this is what he does best. I have never seen him turn this nasty in a film before, a great and memorable performance.

As the icing on the cake, the (nearly complete) cast and director Stephen Poliakoff showed up both before and after the film to do a short round of Q&A. I had no idea this was planned but how cool to not only see Bill but also David Tennant answering questions about this film.

Did I tell you you should go and see this film? Oh I did.

4 thoughts to “Glorious 39 premiere at the London Film Festival”