Clearly if you are a filmfreak like me you need to keep stats on the films you are watching. I have no fully automatic solution for this unfortunately. This is mostly done by manually logging films I have seen (together with my rating) on my IMDB account. Cinema visits need to be logged manually somewhere (Google sheet). So this is all far from waterproof (also think I have seen more films than this but alas) but it’ll have to do.

And those 6 films are the best ones I have seen this year. (Waterboys actually being really good which is pretty unexpected for a Dutch film). And 18 cinema visits is reasonable I think, am sure I missed some there in my stats too though.

Yes I have been a developer in another live but I hadn’t done any programming for ages. Until recently when a freetime project popped up and before I knew I typed 1200 lines of code. I program in PHP – which doesn’t give me any streetcred with real developers I know – but I can make stuff and most of the time it more or less works too (I surprise myself all the time here).

The Github commits are ones I have done for sites at work (don’t tell anyone because I am really not supposed to do this stuff at work but I secretly like it!).

I had never done anything with API’s – and have only scratched on the surface of the endless possibilities they give you but I am addicted now. Api’s are pretty cool. (Wikipedia, IMDB, TheMovieDB, New York Times, Guardian are some of api’s I have been playing with but there is more that needs to be investigated).

The music stats are easy. My Spotify account is linked to Last.fm. And Last.fm is brilliant in giving you an overview of all the songs you have played, most played artists etc. They have stats per week, month and year so – easy does it. Last.fm has my music stats since 2006, so there is a lot of interesting data there – here is my compelete 2016 list.

And I had not listened to tv-2 for a couple of years – but surprisingly this year they are back on my playlist and even number one with a huge amount of plays. (How did that happen?)

And here is a Spotify playlist with my top 10:

The stats here are not that interesting. I went on 3 trips this year, fine. But if you really like to dive into where you have been hanging out throughout your year – Google timeline is totally awesome. If I want to see where we have been driving on the 23rd of September during my USA trip – Google can tell me (Somewhere in Yosemite park apparently), and it also shows me the photos I took along the way. I know that some people find this scary (privacy anyone?) but  I have nothing to hide and I love this type of information, I can trace back my whole USA trip route day by day this way. Only thing I needed to do was to bring my iphone. How cool is that? 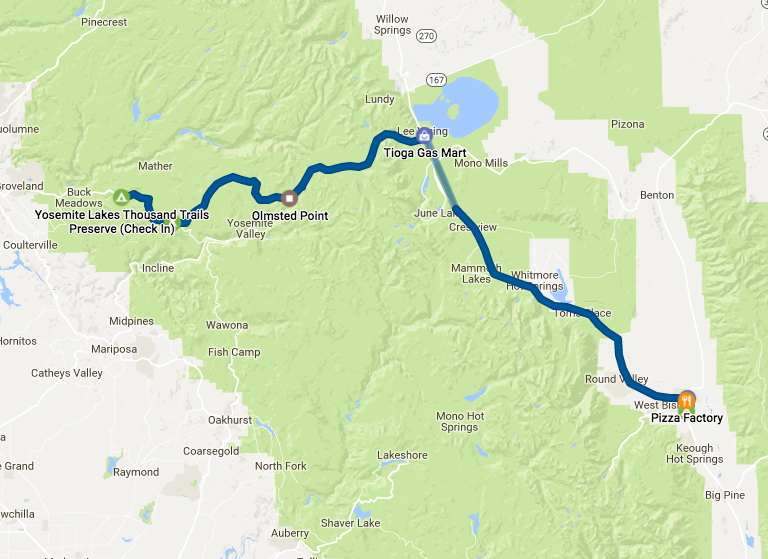 And then there is all the stuff I have thrown onto social media.

Instagram
Could not find a smarter way than to just count the number of images I posted this year: 97.

Twitter (1156 Tweets)
Twitter is slightly easier – for this I use Tweetnest, which exports all tweets to my WordPress database. Tweetnest also displays my tweets and number of tweets per month, so add these 12 numbers together and voila. (There might be easier ways to do this perhaps but hey)  And 1156 tweets – wow. That’s 96 tweets a month, and about 3 tweets a day. I guess for me Twitter is far from dead. (I also prefer Twitter over FB).

Well here I read this interesting article about how you can export your checkins as KML file, import them into google as a Fusion table and voila you have all your checkins plotted on a map.  In this Fusion table you can also see how many checkins you have done in the year and it plots all your checkins on a map which is pretty cool. (The fusion table option is an extra add-on for Google Drive). I checked in at places 533 times. (I mostly tend to do this while on holiday)

I could not figure out how to get the number of uploaded photos in 2016 from Google. So the number shown here is the total number of photos I uploaded to Google photos ever. Quite a number! I love Google photos – I hope it will always be around because it has become my number one place to store all my photos and I can get to them from wherever I am. Also very handy as a way to backup your photos while on the road. And it is free.

I always was a fan of Foursquare (now Swarm) – and still use it. But I also use Google maps a lot, so I have recently started to use this more seriously for reviews and photos of places. There is a minor competition going on with one of my colleagues about who has the most points as a Google local. I am way behind though (and probably never will catch up) but it’s still fun- so this number is likely to be higher next year.

The thing that surprised me the most is the amount of views photos get on Google maps.

And also this difference:

Apparently this sign looks better from the right? Anyway – if you have no idea what to do with your spare time – Google maps is your friend. I posted 417 photos there and 283 reviews.

Knowing that we use Slack for most of our office communication – this is a pretty shocking number. I am not a big fan of typing e-mails but when I look at these stats I can see that I waste way too much time typing them. Let’s see if we can bring that number way down in 2017.

That’s it from the stats department!